* In case of any delay in receiving the OTP, you may verify it later. Please proceed without verification.

Ponda, also referred to as Fonda, is a small city located in the center of Goa and is a part of the North Goa district. It is only 29 kilometers away from the capital of this fun-filled and colourful union territory of India, which is Panaji. The town is popular as being home to the largest industrial area of Goa and has a large number of factories, manufacturing units and industrial property. It is one of the fastest developing cities within the union of Goa.

But in spite of all this, the city of Ponda, also has a rich religious background. Although established by the Portuguese invaders of India, Ponda is not devoid of followers of the religion of Hinduism. The region came to be ruled by the Sonde Rajas, belonging to the Vijayanagar Empire under the Bijapur Sultanate. 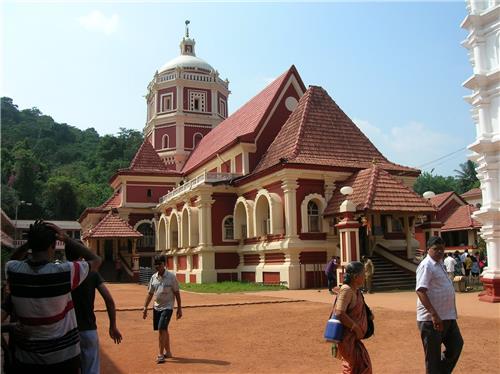 The temple of Shri Mangeshi adorns the idol of Lord Shiva and the Shree Shantadurga Temple has a beautiful idol of the Goddess Durga who is another form of Shiva’s wife-Mata Parvati. The temple is named Shantadurga as she is said to have come in between a fierce battle between the creator of the Hindu Trinity-Lord Vishnu and destroyer-Lord Shiva. Although she was overlooked and flanked by both the warring sides, she came to be known as Shantadurga, as she tried to bring about peace, which in Sanskrit is referred to as “Shanti”. This inspired the followers to dedicate a temple for her and pay their respects and tribute to the Goddess of power of strength as per the Hindu mythology. It was built around the year 1738, right at the foot of the hill of Kavalem.

The present complex of the temple was built under the reign of the Maratha ruler Chatrapati Shahu Raje, who belonged to the Satara region. A minister at the court of Chatrapati Shahu Raje, in the name of Shri Naroram Mantri, originally known as Naroram Shenvi Rege, originally belonged to the village of Kochar in Vengurla region of present Goa. Around the year 1723 he managed to convince king Chatrapati to finance the construction of the new complex of the temple dedicated to Devi Durga. The construction of the temple began in the year 1730 and with a little bit of help from other ministers at the king’s court, the grand and gorgeous temple was finally completed by 1738.  Pleased by the minister’s efforts, the king passed on the village of Kavalem to the authorities managing the temple during 1739.

The Structure and Architecture of Shree Shantadurga Temple

The original temple, which was located in Cavellossim, which was a part of Salsette, was completely destroyed by the Portuguese invaders, in the year 1564. This made it necessary for the temple to be moved to Kavalem, it current location, in order to ensure that the prayers and offerings made to Goddess Durga continued without any hindrance. Presently the site of the original temple complex, now known as Deoolbhata, has been restored to the temple’s trust and is looked after by the members of the trust.

The original structure of the temple was built with clay within which the idol of Maa Durga was placed, which was converted into a proper structure in 1738 and again renovated in the year 1966. The complex is situated at the foothills of the Kavalem mountain chain and is surrounded by lush green lands. Right at the center of the complex, is the main temple in which the idol of Goddess Durga presides and there are 3 other temples, comparatively smaller in size, built in 3 different directions surrounding the main temple.

The roofs of the temples are conical in shape with domes mounted on them, while the wall and floors are built with Kashmiri stones. In addition to these, the temple has a Deepa Stambh, meaning ‘The pillar of Lamp’, which is adorned by a burning clay lamp along with Agrashalas meaning ‘Guest Houses’, constructed for the devotes and a huge water tank for water supply.

The architecture of the temple is quite interesting as it is a fusion of Indo-Portuguese style. All the 4 temples, including the main temple is constructed in the shape of pyramids with a conical roof and the roofs of the entrance hall have Shikharas meaning spires which appear like spikes on the wall. The main hall, referred to as the Sabhamandap has arched-Roman windows with stained glass panes of different colours. Apart from this, the balustrade, the domes on top of each of the temples and even the colour of the temple-an elegant maroon and peach combo, provide an ecstatic view and effect to the temple. The temple also has a unique Palanquin which we know as a Palki, which is made of pure gold and is used to carry the idol of the goddess during the Navaratri or Durga Puja festival.

The temple of Shree Shantadurga is one of the most peaceful and serene tourist destinations of Goa and a must visit for the followers and devotees of Maa Durga.

How to Reach Shree Shantadurga

The town of Ponda is also popular for the Shree Shantadurga Temple, located only 33 kilometers from Panaji in the interiors of Ponda. This temple is among the most frequently visited places in the town of Ponda along with the famous Shri Mangeshi Temple. The former is situated in Kavalem while the latter is in the village of Mangesh.